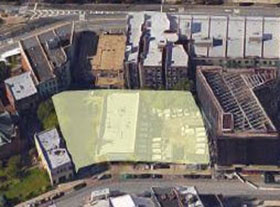 402-422 West 126th Street. The development site is located in the heart of West Harlem just a block away from the main 125th Street retail corridor. The lot allows a developer to take advantage of 135,688 buildable square feet with a community facility bonus and over 102 feet of frontage. With M1-5/R7-2/MX-15 zoning, the site has an FAR of 6.5 and provides flexibility for future ownership to build a mixed-use asset with ground floor retail, hotel and condominium units.

The subject property benefits from its proximity to the Taystee Building, a 300,000 square foot Class A high-end building on the same block, which, once complete, will have a positive effect on the entirety of the Manhattanville Factory District. The site is also steps away from the Columbia University Expansion Project, a 6.8 million square feet state-of-the-art extension to its existing campus located between Broadway and Twelfth Avenue from West 125th to 133rd Street. With Phase 1 nearing completion, the Expansion Project is expected to generate more than 6,000 jobs and bring more than $11 billion in economic activity to the area. 402-422 West 126th Street will undoubtedly benefit from the influx of community-oriented retail space emerging in the area including bars, coffee shops, restaurants and live music in addition to Harlem’s existing destinations.

The newly constructed Aloft Hotel at 2296 Frederick Douglass Boulevard has a room rate>$200/night, allowing a hotel developer to immediately establish their presence by building a premier hotel in a thriving neighborhood with nearby and easily accessible transportation, robust foot traffic and excellent visibility. The property is within close proximity to the A, B, C & D subway lines on West 125th Street and Saint Nicholas Avenue, as well as a number of bus routes that canvas the area.

Triple Net Investing specializes in the sales and acquisition of commercial properties. If you need professional assistance, get in touch with us.